DynEd Certification is a system for recognizing and confirming student proficiency levels in English.  It is based on the Common European Framework of Reference for Languages (CEFR), an internationally respected system for describing language levels developed by the Council of Europe.  CEFR proficiency levels underlie many major tests, including the TOEFL, TOEIC, IELTS and Cambridge exams, and are increasingly referenced by Ministries of Education around the world in setting the goals and standards of the national English language curriculums.

DynEd has amassed over 30 years of detailed data covering student study behaviour, rates of progress, and test results.  This data forms the foundation by which DynEd’s Certificates have been aligned to the CEFR.  DynEd can now provide students with even clearer goals, as well as internationally recognized Certification of their achievements. 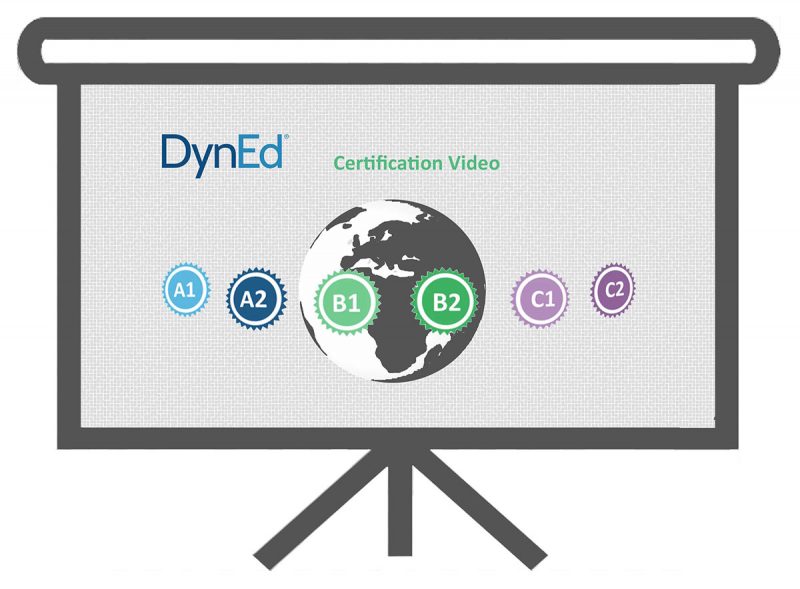 These menus help students assess their progress toward their certification goals by clearly showing which courses and units have been completed, and which still need to be studied or reviewed further.

Can understand and use familiar everyday expressions and very basic phrases. Can introduce themselves and others and can ask and answer questions about personal details such as where people live, who they know and things they have. Can interact in a simple way provided the other person talks slowly and clearly.

Can understand the main points of clear, standard input on familiar matters encountered in work, school and leisure. Can communicate on topics, which are familiar or of personal interest. Can describe experiences and events, dreams, hopes and ambitions and briefly give reasons and explanations for opinions and plans.

Can understand demanding, longer texts, and recognise implicit meaning. Can express themselves fluently and spontaneously. Can use language flexibly and effectively for social and academic purposes. Can produce clear, well-structured, detailed text on complex subjects using organisational patterns, connectors and cohesive devices.

Can understand sentences and frequently used expressions related to areas of most immediate relevance. Can communicate in basic and routine tasks requiring a simple and direct exchange of information on familiar and routine matters. Can describe in simple terms aspects of their background and immediate environment.

Can understand the main ideas of complex text on both concrete and abstract topics. Can interact with a degree of fluency and spontaneity that makes regular interaction with native speakers quite possible. Can produce clear, detailed descriptions on a wide range of subjects and explain a detailed viewpoint on topical issues.

Can easily understand virtually everything heard or read. Can summarise information from different spoken and written sources, reconstructing arguments and accounts in a coherent presentation. Can express themselves spontaneously, very fluently and precisely, differentiating finer shades of meaning in complex situations.

Each DynEd Pro Certificate has a Universal Unique Identifier code at the bottom that provides employers and university recruiters with a simple way to confirm its authenticity. To confirm that a student has been certified by DynEd, simply visit www.dyned.com/certverify and enter the requested information about the student to see a copy of any Certificates they’ve earned.